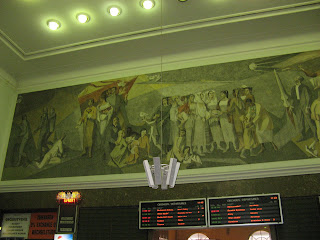 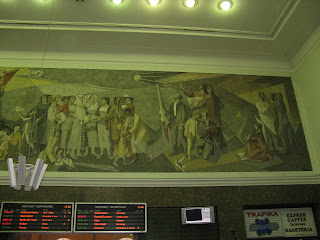 This mural is found in the main hall of the central train station in Bratislava; most passengers pass quickly beneath it on the way to the platforms and don't pause to glance up and see it on the wall above.
The mural contains many of the classic hallmarks of socialist thought. Looking from left to right, on the far left the viewer can see three 'capitalists' in their business suits being driven away by the moral superiority of the group standing to their right beneath the red banner of socialism with doves flying above their heads. One of the capitalists is dropping a gun to the ground, suggesting both cowardice and that their aggression towards socialism will be defeated in the end. A worker from the capitalist system (dressed in white) is being freed from the chains of the three capitalist masters so that he can come to join the group on the right. The group beneath the red banner has three dominant figures, a proud steel mill worker holding tools, an intellectual holding a book, and the flag bearer who stands above them providing the foundation for the development of the new society that labour and learning will develop together in partnership. The group standing in a circle at the centre of the mural is composed of women from different countries around the world, implying that socialism is the system that will unite the world in peace and unity. On the right-hand side the viewer can see the symbols of technology and learning that will make the socialist utopia possible; at the top we can see a rocket and a satellite (which looks like Sputnik) representing the scientific advances that socialism has produced ahead of the capitalist world. Below these we see the scientists who have produced these ideas, as well as the students learning from them who will develop the technologies of tomorrow.
Posted by Goulash Train at 1:14 PM

Goulash Train
This blog is based on my personal travel experiences while living and working in Slovakia, Poland, Russia and the Czech Republic for ten years. I have a particular interest in the folk culture and wooden architecture of the Carpathian mountains. Eastern Slovakia and Ukraine's Zakarpattya region are my favourite places to explore - I'm familiar with these regions on a village by village level.